The Gluten-Free Can o' Worms 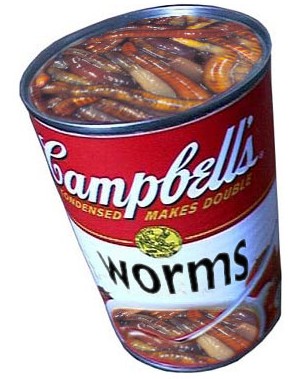 First of all, I can't believe it's been nearly a year since I've posted anything! I read my last post from February of last year and wow, yeah, I was having a hard time then. Still am, actually. Nothing's changed, except, I DID try to put Mom in an adult family home, but in the end, I just couldn't do it. Adult family homes are full of people that are REALLY out of it, and my Mom isn't there yet. So I'm still doing the same thing......BUT, things have improved in that I get every 3rd week off and have a care company come in and take over for me. So I get some full weeks at home. SUCH a stress reliever!

The really sad thing is I totally stopped exercising because of the drama at home and at Mom's. I was just too depressed to get off my fat butt. Gained all my 25 lbs back and then some. Sad face indeed. But, I'm climbing back on the wagon, uh, er, treadmill.

But actually the point of this post is something that has gotten my panties in a wad for some time now. Yep. I'm opening a can 'o worms here, but here goes.

It's the Gluten-Free fad. And yes, I'm calling it a fad. Remember the Oat Bran craze? Food manufacturers really got on that bandwagon. Oat bran items were everywhere. Then there was the whole Atkins/Low Carb thing. A low-carb store even opened in my Mom's neighborhood (which is now closed...hmmmm). Then it was the focus on trans-fats. And high fructose corn syrup.

The thing with oat bran is that it's not restrictive.......add oat bran to whatever you want, it's not gonna kill you. Baking with it......well, I don't really recommend that, as a professional baker myself, using oat bran in place of other ingredients, well, just screws it up the recipe, and frankly it tastes like shit. I never found an oat bran recipe that tasted decent. The Atkins/Low Carb thing wasn't/isn't so bad. It gets people to eat more protein and produce and less carbs, which is a good thing. In restaurants it's easy to order low-carb items too. Manufacturers got on the bandwagon by labeling foods that were already low-carb to begin with as "low carb". Gotta love marketing. Trans-fats? I agree, bad, bad. Trans-fats are chemically created by humans, as are genetically modified food and high fructose corn syrup. And the sheer amount of these ingredients in commonly purchased foods is NOT a good thing. Again, it's easy to steer clear of these things by not buying products with high fructose corn syrup, or trans-fats. Just requires a little label reading. As far as genetically modified food, buy organic. But in the case of products produced with GMO's, they aren't required to label it, which is kinda scary. Yeah, those "Corn Puffs" you eat every morning? They could be made with GMO corn, and you'd never know it. The FDA needs to change this.

As a pastry chef, I can tell you, that less than a few years back, not a whole lot of people knew what gluten WAS. In pastry school, I learned about gluten in 1991. About how important it was in the application of producing baked goods. I learned about different flours and how much gluten they contained; for instance, cake flour=low gluten, bread flour=high gluten. Believe me, I know my gluten. And as important as sugar, butter, and eggs......gluten is a tool of my trade. So yeah, I'm a little upset by the gluten-free "fad" because now we have to cater to the self-diagnosed gluten-free consumer. Baking certain items gluten free isn't so bad, like cakes, cookies, brownies, scones, biscuits......anything that doesn't require a high gluten content to begin with. You can easily substitute all-purpose and cake flours with rice flour, soy flour, etc. But when it comes to bread, and I mean GOOD BREAD, people, it's REALLY hard to bake gluten free. And if you do come up with a gluten-free loaf, it's NOTHING like really good artisan bread made the usual way. And it's damn near IMPOSSIBLE to make a good croissant, danish or puff pastry without flour that isn't high in gluten. Those things require it. And if someone is producing gluten free croissants, danish or puff pastry SUCCESSFULLY, then what in the heck is in there, replacing the gluten? One can only imagine.

Sure, restaurants and food manufacturers are making it easier to order and buy gluten free items. Because they have to. If you don't jump on the bandwagon, you're behind the times and you lose sales. Money is the bottom line to them......food trend......go with the flow. The world of food is a low-profit margin business, and manufacturers and restaurants are pretty much forced to follow trends.

I've asked people who are eating gluten free why they are doing it. Some say they do it to lose weight. Well of COURSE going gluten free will help you lose weight. That's because they are replacing gluten rich items (which are also high carbohydrate items) with healthier things, like more veggies and fruits, nuts, seeds, unthickened soups, etc. Sure you're going to lose weight on that kind of diet. It has nothing to do with whether you're eating gluten or not. Some people say they have "self diagnosed" themselves as being "gluten intolerant". I must ask, how did you come to this conclusion? Did you eat gluten free for a week and discover you felt better than you previously did? Why would you say it was because of the gluten? Maybe it's because you made better food choices, like vegetables and fruits that are high in fiber and other nutrients. You eat more healthy whole food, sure you're going to feel better. I'm not against self-diagnosing, but if you are going to go that route, you need to do it right. From research that I have done on this subject, first a person should try eating completely gluten-free for at LEAST two weeks. Then slowly introduce low gluten items back into their diet. Then if they feel OK, have a little more food with higher gluten content, like a piece of french bread. Then if symptoms come back, like gastro-intestinal distress, general malaise, weight gain, headaches, etc. It COULD be gluten intolerance. To really be sure though? See a friggin' doctor. Because the general symptoms of gluten intolerance are also indicators of other problems and diseases. So what ARE the symptoms of gluten intolerance?

If you really read through these symptoms, you come to realize that they are also symptoms of any number of maladies. My mother has Crohn's Disease. A lot of her symptoms are on this list. But her symptoms are not caused by gluten. For one reason or another, she developed this disease over 20 years ago for unknown reasons. It's an auto-immune disorder, which also helped her develop Myasthenia Gravis, another auto-immune disorder. So what I'm really saying is, that self diagnosing isn't really a bad thing, but if you want to be SURE that gluten is your enemy, you can only find that out by a trip to the doctor. They have two tests for this, a blood test, and a biopsy taken from the small intestine.

So if you self-diagnose AND follow up with a doctor's visit and everything points to a gluten allergy, or even celiac disease, then by all means, eliminate your gluten.

Here, though, is the question that I believe trumps all other questions. And that is, would you really have attributed your symptoms to gluten had it not been for all the media hype and coverage about it? Like I said, not too many years ago, nobody really knew what gluten was, or what it did. Now, because so much attention has been drawn to it and explained to the general public, they now think it's a cure-all for symptoms such as being overweight, bloated, exhaustion, achy joints, depression.....see list above.

I also researched another article, which said basically this, if you feel fine, and eat a healthy diet, exercise and have none of the above problems or only some, there is no added health reason to go gluten free.

I guess my point here is, that people are always looking for the "magic pill". The one solution that will cure everything. That magic pill doesn't exist. As the medical community has pointed out for years.......diet, exercise, stress management and good life choices are the "cure" to most maladies pointed out above. If you do all these things and still don't feel right.......really......go see a doctor. It's the safest thing you can do.

As I said, I'm SURE this will open a can of worms, and I'm certainly not opposed to civil discourse on the matter. But keep the hate speech to yourself; this could indicate narrow mindedness, and irritability, and I would diagnose you as an asswipe.

Posted at 04:35 PM in Food and Drink, Health and Wellness, Science | Permalink

I can't believe you waited a year and this is what you came up with! Damn Val, I thought you would have all sorts of thoughts about aliens taking over Washington D.C. or sex scandals with senators and hippos. So disappointed.

Aliens taking over D.C. may be a good thing actually. Sex scandals? They're so common it's becoming a major yawn-fest. Of course, if *I* were involved in a sex-scandal, you KNOW I'd post about it right away. :/
Sorry to disappoint, but I had to get this off my chest......oh.......wait.

Hello!!! Can you please email me at
bringingprettyback@gmail.com
I have a few questions about the flair stove!
I want one , badly!
Love your blog!! I just didcovered it!
Have a pretty day!
kristin

I AM SO HAPPY I FOUND YOUR BLOG AGAIN!!! I stumbled upon you years ago bc of the beautiful flow pot cake you did and I found myself literally laughing at loud at your posts!! I hope your mom is doing better and that you are able to find some more time for your self through this transition. Prayers to you and your family!!

Thanks for your prayers Alicia! Mom is doing slightly worse, but it's all under control. My brother is helping me out more, and I get a break every third week by having a professional caregiving company come in and take care of her. So......it's all good.