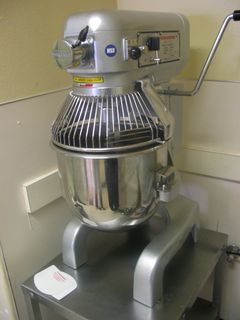 Fabmixer
Well, it's here......the new mixer is here. Safety freaking cage and all. But I must admit, that (aside from the safety cage), the mixer is better than I thought. I found out that all our Hobart bowls and attachments WILL fit on it, which is great. Other pluses include:
The not so good things:
I sheepishly told Boss that I complained and whined a bit prematurely and this mixer is a very good thing. However he wouldn't install it until I paid penance and banged my head against the wall a few times. Now my head hurts but that's nothing new. Me, and the wall, we have a close relationship. 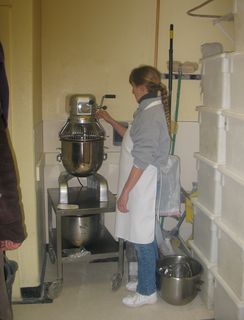 Jewlzmix
Jewlz loves the new mixer too. Having second speed back is a good thing. Here she is testing it out. Have I mentioned that Jewlz rocks my world and kicks my butt? I think I have. It's awesome to have a co-worker that not only steps up to the plate but hits a home run every time.......and she's not even on steroids. She drinks tea and eats lotsa veggies.....unlike me, the coffee-junkie carnivore.
In the left hand foreground is the ruling hand of Boss. Do not mess with the ruling hand! But it is OK to mess with the ruling head. HA HA! Just kidding Boss!!!!
He reads my blog you know. So, Boss, howzabout that dishwasher???? You know, that one.....sitting outside?
Or is that the first installment in the Village Baker Sculpture Park?
It's a very good thing he puts up with smart mouthed employees.

Hmmmm, shiny, I like shiny...Hey look on the bright side.  All your attachments fit.  How sucky would that have been?!?

Congrats on the arrival of your new baby and to the courtship of getting to know each other :)

Congratulations! I was really happy with the 60qt

I found a Hobart at auction but you no longer need my help so I will sit over here in the corner, alone, with no light, or chair, or heat, or food, or...

Hey, longtime stalker here! I actually was looking to see if anyone posted how to he disable the thunderbird cage online, and found you
any chance of instructions? My 12 keeps tripping the circut, and I made this mistake of taking off the cage on the Tbird to clean and now it will not go back on correctly for some reason and the mixer wont turn on and I am babbling but given my orders this week I am on the verge of a nervous breakdown!! HELP!

First, I didn't know you could take the damn cage off! Wow. Cleaning would have been so much easier!

Ok, this is what I remember.......it may or may not work for you. Do you see any type of switch or button that the safety cage trips when it's completely turned around so the mixer turns on? If so, you can duct tape it so that it is permanently tripped. Even worse, does the safety cage have something that sticks up to trip something that is somewhat "embedded" toward the back of the mixer? You'll have to find a way to stick something like a broken of skewer in there to trip the switch, then tape it in. I don't know what model you have. I went to the Thunderbird website and I found some phone numbers.......Texas Office: 1-866-7-MIXERS or 1-866-875-6868 or 1-866-451-1668. There's also some phone numbers for the Blaine, WA office too.

Hope I've helped you somewhat! There MUST be some way to put the cage back on! I mean you got it off, so it must go back! Keep messing with it.....damn things anyway!